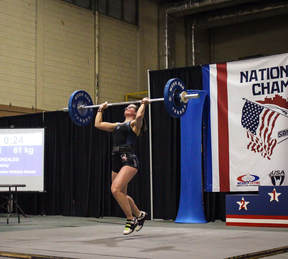 A native Montanan and RMC grad, I got started in the fitness industry in 2011 by obtaining my Personal Training, Fitness Nutrition and Exercise Therapy certifications from ISSA.  While living on the East Coast for three years, I worked at a commercial gym as a personal trainer where I was also introduced to CrossFit and the Olympic lifts.  When I came back to Montana I wanted to get better at the Olympic lifts and was encourage by some Alternative Athletics members to come down and work with the Oly coach, Phil.  Having quickly fallen in love with the lifts, I began competing soon after starting to work with Phil and discovered a passion for lifting on the platform as well. I have had the chance to travel and compete in many meets, including at the masters national level, and more meets upcoming on my calendar!  My  goal is to continue to share my love and knowledge of the lifts.  I have attended several weightlifting seminars, including one from Olympic gold medalist, Aleksey Torokhity (where I was introduced to the Russian style of lifting), and have my USAW Advanced Sports Performance (Level 2) certification.

I am also a certified Life Coach and hold an Associates degree in Holistic Healthcare and Wellness.