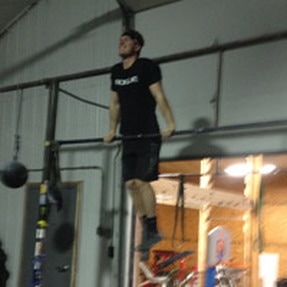 I am Ryan Reddick and I became a CrossFit Level 1 Trainer in August of 2015. I grew up in Townsend Montana, where I played Football and Basketball. Before my senior year of high school I wanted to be a better athlete and I found CrossFit online. I began doing CrossFit workouts occasionally on my own instead of the typical GloboGym type workouts. I noticed a major change in my overall athleticism and after my high school sports career ended I know I wanted to continue doing CrossFit.
I came to Billings to attend school at Montana State University Billings in the fall of 2013 and I quickly found Alternative Athletics in February of 2014. I graduated with a degree in Health & Human Performance in the spring of 2017. CrossFit fulfills my competitive nature and it is also a great way to increase physical capacity. Between the people and the workouts, CrossFit gives the entire experience and that is why I decided to begin coaching. I love to see people walk into the gym not knowing what they are capable of and walk out feeling accomplished.